The flora of the district characterizes two major ecological divisions, northern and southern. The botanical life found in the northern half identifies itself with that of the rest of the irrigated tracts at central Punjab. The human interference in the form of irrigation network has virtually wiped out the old plantation without much revolutionization of the phyto physiography in the area. While there had been a considerable increase in the cultivated area, factors such as water logging and salinity have badly hit plant life and with the increase of salinity at the surface, only the salt resistant plants can survive in most of the area. The southern half is characterized by sand dunes, more or less barren of vegetation except in the rainy season when multitudes of ephemeral or short lived plants come up and transform the bare land into a lush green carpet. These ephemerals complete their life-cycle before the advent of summer heat when the bulk of the area reverts to sandy plain, desolate and barren. In general, the vegetation in this part of the arid region is sparse. Only plants with xerophytic adaptations such as deep roots, dry, hand and rod-like thick or fleshy stems, leaves either absent or much reduced, though usually with a coating of wax or hair to prevent excessive transpiration, are able to establish themselves in this extremely dry climate. The bulk of the vegetation consists of stunted, thorny or prickly shrubs and perennial herbs capable of withstanding drought which grow in open clump formation with plenty of vacant spaces between them.

Distinctly scattered trees of stunted growth are found along the depressions technically known as desert scrub.
Plants found in Cholistan are as under:

An unblemished geographical feature of a vast arid land, popularly known as Cholistan desert provides an ideal opportunity for a variety of wild-life. A wild cat still exists in the area which as the desert traditions say, is very fond of ripping apart the newly born young ones of Chinkara deer. Pig known as Hirhoon, Jitama, Bhoondin or Soor in this area is found in a fairly large number in government plantation near the desert. Jackal (Geeder), fox (Loomeri), badger (Bijjoo), also exist in the desert. Wolf locally known as Mahr is negligible now. Porcupine (Seh), squirrel (Golhari Fubhri) and jerbils musk rat (Chhachhoondar), wild rat (Chooha) of brownish colour mongoose (Neola), are generally visible. Mangoose has half a dozen of varieties in this area. Though small, it readily attacks much larger animals and wins a blitz kriegespiel victory. It kills large number of poisonous snakes and rodents and its fur is erected like a bottle brush, when it engages a snake combined with very fast movements, in the combat. A duel between mongoose and cobra used to be a familiar attraction in village festivities generating enthusiasm of no less than a bull fighting.
Some of the animals such as hog deer (Parha), blue bull (Neel Gaee) and ravine deer (Heron) are more or less non-existent now and are rarely witnessed across the Indian borders. Black buck, once a beauty of the desert has been totally eliminated. Chinkara deer is, however, not a rarity. Its existence is more or less due to severe restriction imposed on shooting. It has timid beautiful eyes, quivering nostrils and needle fine legs. It is a fine specimen of antelopes, though not as original as the black buck, commonly known as Ghazaal. Its beautiful eyes, matches with those of the beloved, find mention in Urdu, Arabic and Persian poetry.
Black crow, sparrow and dove are numerously common in other parts of Punjab. Green parrots are also found and generally damage the crops. Myna is however a useful bird for cultivators. It normally and naturally feeds on pests. Lark is another bird which charmingly chats in the early morning hours. Owl has also established its existence in the specific types such as Chibri and Ghug. Falcons here are of various species known as Baz, Shikra and Shaheen etc. Tanny eagle, spotted eagle, bonelli's eagle, lagger eagle, white and black vultures, mash harrier and kestrel are generally spotted in the area. Falcon used for hunting the bustard is especially trained for this purpose. It is caught hold of at tender age, through interesting indigenous methods which are other wise banned under the law protecting the wild life.
Some rulers of Middle East has tremendous fascination for falcons of this desert, which are very fast in combat but impatient to rip the prey apart. Some of them come to Rahim Yar Khan district each winter so as to hunt birds in a very masterly manner with hawks. Houbara bustard and little bustard are their favourite birds. Bustard usually arrives in October and it is bigger than falcon in size. While ultimately the falcon succeeds in humbling it nevertheless gives a good fight with its power packed wings. It is also fond of walking for kilometress on the sand with its powerful strides and has erect like a Turkey from one patch of stunted thorn to another. Great Indian bustard is now very rare and almost extinct.
Sand grouse and the imperial sand grouse are enriched with their embellishing attraction for the hunters. A little earlier it was assumed that these birds are also migratory creatures who visit the desert during the winter season. But this assumption has to be discarded because the sand grouse known as Kashmira is a native bird and lives in the desert all through the year. Another significant migratory bird is posture nosi, known as Tilyar in the local dialect. The bird is normally nine inches long resembling the ordinary Myna . It has dark gray features and glistening head. These birds are gregarious. In general they pay their sojourn in this district as a whole in summer season when the stray locust fly over. This bird perishes pests as being considerably helpful to the cultivators. The flock of such birds normally ranges from 10 to 100. Gray partridges are mainly found in the tracts when patches of cultivations are surrounded by sandy waste ground. Similarly typical black partridge is also found in the thick ground cover and is reputed for its wondrous creaking call. Quails are also available in the district. 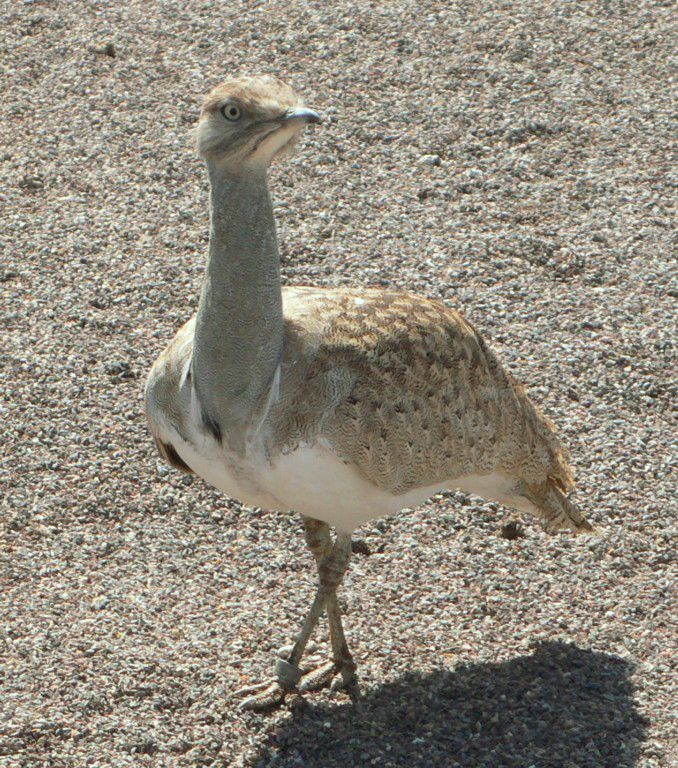 Wild lizards are witnessed here in a number of species including Goh, Kirli and Kirla. Another species is locally called Gohira and yet another Sanda. The latter is poisonous. Cobra (Phinyar) is comprehensively believed by locals to be found in the varying shades. A very deadly poisonous snake Padam is also found in the district as the local saying goes "Jen Ko Dangia Padam, Chalan Na Ditha Qadam", (he whom Padam has bitten, will not go another step). Lizards have various legends behind them. About Khanni lizard, it is said that it does not reproduce its kind by copulation and is born of snake. Another lizard Gilai if seen by a women during a chum will cause the quantity of butter to increase. The Wains snake on the other hand steals milk by climbing up the buffalo's leg and sucking its udder. The deady Ghordang moves faster than a galloping horse. While the Kulsar has the power of conveying its poison to its human assailant merely by bitting his stick. Sah-peena according to a legand, never bites in day light, it crawls into the victims breath at night and kills him with its breath.
White egrets, little egrets and black wing stilts are common and feed on insects and fish. These are usually seen when fields are watered. These also flock along the depressions containing percolated or rainy water. Once in plenty, these are still available in and around Dhand Gagri and Tatar Jheels. Here one also finds wild fowls, pheasants, tailed jaconas, mullards, teals and berons, while green bee eaters are found on the isolated reeds. Machira as it is locally known (Alcodoatus pallasi) lives near lakes and ponds in the area. Common ducks of various sizes and shades are found in the river side lakes. A black water fowl (Kawani) is also available in the Indus and near Punjnad river, lakes and creeks. Some of the migratory ducks have also been witnessed in the natural lakes formed after floods. Koonj, a migratory bird, also lands on the banks of the river and side ponds. Amphibians generally include only frogs and toads.
Over 40 varieties of fishes are found in the district. Rahu, Thaila, Mori, Mullee, Khaga and Sanghara are however found in abundance in river, canals and ponds.